My Year at the Mill: A Creative Residency

As Barry Mill gears up for another weekend of Easter Egg hunting, it seems like eggs-actly the right time to look at the origins of Easter and why we associate it with eggs!

One of our most enduring customs here in Scotland is the ‘rolling of the eggs’, usually carried out with great excitement on Easter Sunday. While writing my current book (Grist! The Life, Lore and Landscape of the Scottish Watermill, to be published later this year by Little Toller Books) some great memories of my own childhood at my Gran’s cottage in Carnoustie came flooding back:

‘ I remember my great aunt spending the days before Easter Week dying hard boiled eggs and carefully packing them back into their boxes to be brought out with great excitement on Easter Sunday Morning. Without doubt, those beautifully coloured eggs were as magical as the chocolate variety. She had a tiny cupboard with drawers where she kept little vials of food colouring. She also used beetroot, tea and onion skins, boiling the eggs for ages in a big iron pot. Once the eggs had been carefully handed over, we went out into the (very flat) garden to roll them. It’s actually better if you can find a hill! The aim was to crack the shell of someone else’s egg, and once all the shells were successfully bashed, you were free to tuck in. I always remember the egg white being as tough as rubber, but very delicious!’

(From Grist! The Life, Lore and Landscape of the Scottish Watermill, 2019).

My Gran always reminded us that rolling our eggs represented the rolling of the stone away from Christ’s tomb, but during my research, I came across the following custom, associated with Beltane, which is remarkably similar. Beltane was, of course, one of the great Celtic Fire Festivals and would have occurred a little later, around May 1st. It symbolised the return of the light to the earth, and children were often given eggs to bake in the hillside bonfires. No doubt, as children do, they would have had great sport rolling them down the slopes.

Eggs are ancient symbols of new life and rebirth, which chimes well with the Christian celebration of the resurrection of Jesus, but Easter actually takes its name from the pagan goddess Ostara.

Jacob Grimm ( of fairy tale fame), writing about Easter in the 19th century, pointed out that the Old High German adverb ôstar “expresses movement towards the rising sun”, as did the Old Norse term austr, and potentially also Anglo-Saxon ēastor.

Whatever your Easter holds, have fun, and hopefully you’ll join us at Barry Mill for one of our eggstraordinary egg hunts! 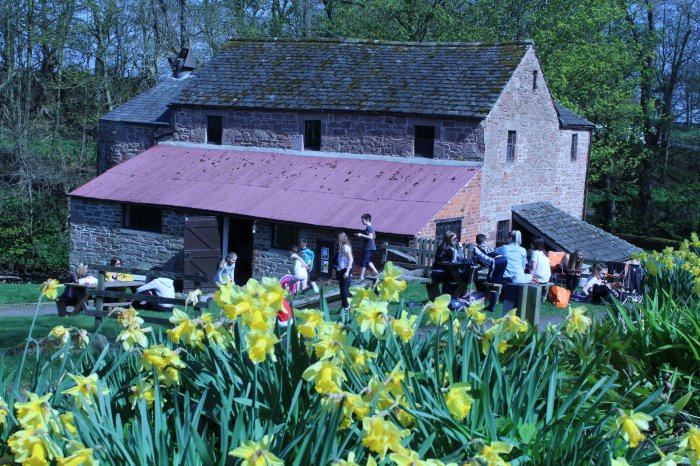